Game Crazy Kick! not like the soccer games you've ever played. If Dream League Soccer or  Extreme Football requires you to control the entire team, then Crazy Kick! will ask players to control only one ball.
4.3/5 Votes: 16,474
Report
Developer
VOODOOVersion
1.7.18
Updated
14 dMay 2021Requirements
4.4 and later versions
Size
72MGet it on

Game Crazy Kick! not like the soccer games you’ve ever played. If Dream League Soccer or  Extreme Football requires you to control the entire team, then Crazy Kick! will ask players to control only one ball.

At the beginning of the game, you will play like a ball with the players on the other side to get into the opponent’s goal. So how do you control the ball? It’s easy. Just use your finger, slide across the screen to move the ball in the direction you want.

Crazy Kick! – not as easy a game as you think

At first glance, it seems that this game is pretty simple. But it’s not that simple. In Crazy Kick !, there are always a lot of defenders and a goalkeeper to defend the goal. Every time you get close, they will make a determined tackle, pushing you as far as possible. In addition, each level has different obstacles such as an iron fence, a fence, or dangerous pits. If the opponent kicks your ball, you will lose.

To score a goal, you need to be very careful. Move the ball quickly, dodging the tackles of your opponent, and stay away from bottomless pits.

The hero of our review has many unique football fields. Not only the stadium, the football field can also be on a farm or even on the roof of a building. Each area has its own characteristics and obstacles. Suppose there are deep holes on the farm. If you are playing on a mountain, you will have to play on uneven terrain. If you are not careful, the ball can fall down the mountain. This brings the players a lot of really interesting experiences and gets rid of the monotony. 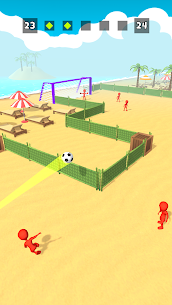 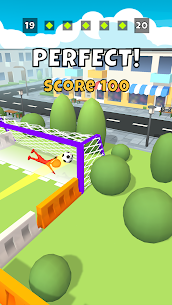 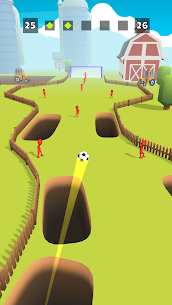 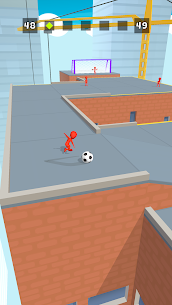 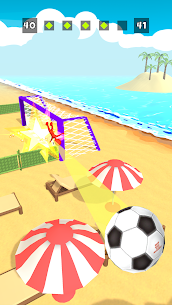