Starting the game Lumbercraft , the first thing you need to do is to build a city. Create your first buildings such as a clinic, a smithy, an exchange office, a woodworking workshop.
Download
3.7/5 Votes: 60,772
Report
Developer
VOODOOVersion
1.4.3
Updated
7 May 2021Requirements
7.0 and later versions
Size
96MGet it on

Starting the game Lumbercraft , the first thing you need to do is to build a city. Create your first buildings such as a clinic, a smithy, an exchange office, a woodworking workshop.

Any building is very important for the city. One example is a hospital where you can buy health recovery bottles. The upgrade zone allows you to upgrade weapons, armor, or the strength of buildings. The sawmill will automatically produce wood even when you are offline. It is considered to be a passive place of timber production, which allows you to collect income at any time.

Wood is the only resource in Lumbercraft. It is used to construct buildings and exchange them for coins. At the start of the game, wood is not available. You need to cut trees around the city and collect them. If you don’t feel that sawing wood is unproductive, you should upgrade your workshop. Lumber is harvested automatically.

The lumberjack is more than just felling, collecting timber and building buildings for the city. You also have to fight monsters to protect your city.

Specifically, Lumbercraft has two regions. The first is your city – your home where you live. The second is a dangerous zone where monsters live. You will have to enter the Zone to constantly destroy them. Otherwise, they will attack the city.

When you get close to monsters, he can automatically attack them. Until the entire wave of monsters is destroyed , you will pass the Zone and open the gate leading to the next Zone.

The complexity increases accordingly. Monsters are becoming more diverse. They can get stronger and faster. You need to master the skills of attack control and evasion in order to minimize injury. Please note that you cannot return to the city to buy potions during the fight. If you die, you will lose all the timber resources you have earned and will play in this Zone again.

Improvements help the character become stronger and increase stamina. By default, the character is equipped with an ax, shield or armor. You can upgrade them. Improved shields and axes will change their appearance. They even have rays of light when the character attacks an enemy.

In fact, no matter how strong you are, you cannot win if you fight alone. So, the first thing to do when entering the Zone is to build defense towers. If there is not enough firewood for this building, move around, chop and collect firewood. You have about 10 seconds to build the tower before the monsters appear.

There are two types of tower defense, including an arrow and a cannon. Each has its own advantages and disadvantages. The cannon has higher damage, but can only hit enemies at close range. Archers can shoot further, but they are weaker. To improve these attributes, you can upgrade towers in the city.

Why do I need a MOD version of Lumbercraft?

Coins are the main currency in Lumbercraft. You only have two ways to earn more coins. The first is to exchange wood for coins in the store. The second is fighting monsters and collecting money from which they drop. However, there are not many of them. The mod we found helps to solve this problem. You will have unlimited money. You can use them to upgrade your characters, buy health recovery potions and strengthen defense towers. 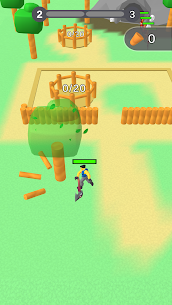 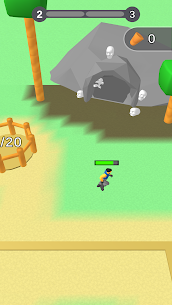 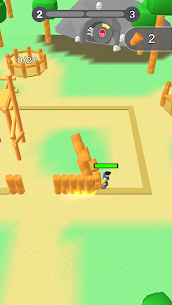 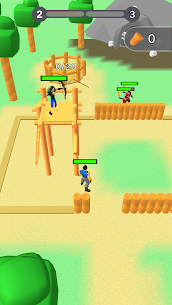 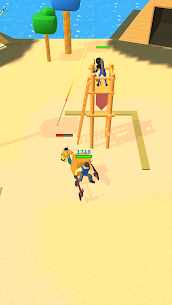